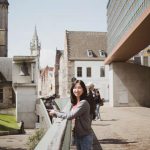 Once upon a time the sky and the ground cried upon the creation of Chinese characters because since then, the secret of the world was revealed. Such a fairy tale was the origin, since I was a little girl, of my interest in language. It persisted during the post-secondary education and fully developed during my bachelor and master thesis where I studied the reaction of different personalities to different emotional words and the influence of video games on our second language ability, respectively. After graduation, I noticed, as a Python course designer, that individuals who are good at learning a new programming language share some common cognitive patterns. To pursue a further understanding of such an insight, I completed the 1-year Cognitive Neuroscience Program at Maastricht University, culminated with an internship under the supervision of Dr. Francesco Gentile and Manli Zhang. This project focused on the the modality independent neural representations of letters and numbers. I am, now, member of the Brain and Language group as a PhD student and I will investigate the neurobehavioral underpinnings of programming skills.